Poppers is a slang term for various alkyl nitrites that are inhaled.

The most common poppers are isoamyl nitrite, isopentyl nitrite and isopropyl nitrite. Isobutyl nitrite used to be common in the European Union before it was banned there.

Back in the 19th century, amyl nitrite used to treat angina pectoris pains was sold in a glass capsule called a ”pearl”. To release the amyl nitrite, the pearl would be crushed. When this happened, a popping sound could be heard. The patient would then inhale the vapours released from the broken pearl. This popping sound is believed to be the origin of the slang term ”poppers”. 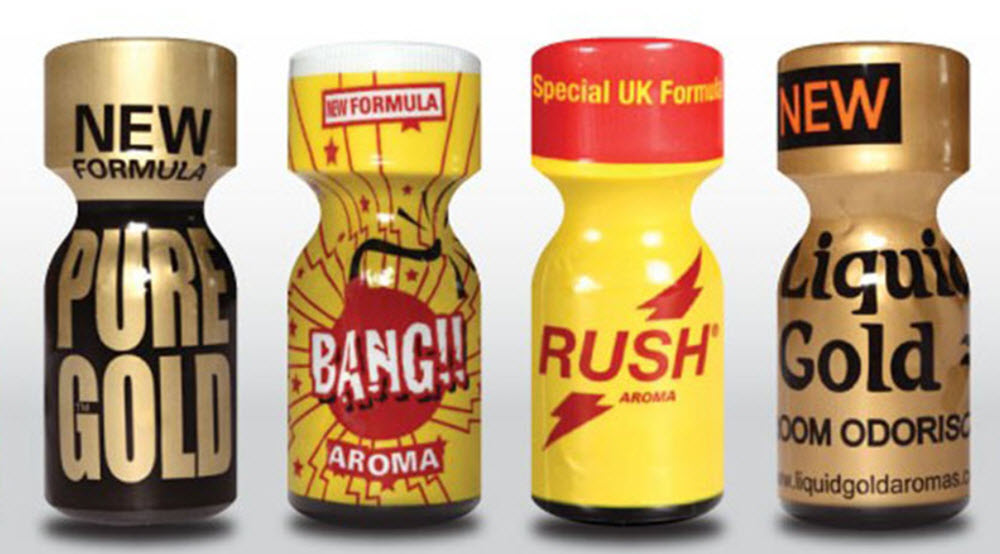 Poppers are inhaled through the nose, either directly from the bottle or with the help of a small separate inhalator.

When inhaled, alkyl nitrates causes the smooth muscles throughout the body to relax, and the sphincter muscles of the anus and the vagina also become relaxed.

Smooth muscles surround the blood vessels, the blood vessels will expand when the muscles around them become relaxed. This expansion prompts the heart to beat faster and blood flow throughout the body is increased, giving the user a sensation of heat and excitment. The sensation will usually only last for a few minutes.

Examples of side effects

When combined with other vasodilators, alkyl nitrites can cause a serious drop in blood pressure. This in turn can lead to fainting or even a stroke.

Swallowing poppers instead of inhaling them is more dangerous and can cause cyanosis, loss of conciousness, coma, and death.

For markets where poppers are illegal, or where there is a social stigma attached to their use, it is quite common for manufactorers to package and label them to look like something else, such as tape head cleaner, leather polish or room deodorizer.

These are some examples of alkyl nitrities utilized in poppers.

The legal status for poppers vary significantly between different countries. Here are a few examples:

In 1867, the Scottish physician Stir Thomas Lauder Brunton documented how an amyl nitrite inhalation could relieve pain when a patient with angina pectoris was experiencing chest pains. Brunton was inspired by earlier work with amyl nitrite carried out by Arthur Gamgee and Benjamin Ward Richardson.

In the late 1890s, Brunton documented similar effects for butyl nitrites, but they never caught on as a clinical alternative to amyl nitrates. Brunton also found that propyl nitrites worked in a similar way, but they also failed to become popular within the medical field.

The first documented case of recreational use of poppers is from 1964.

In the early 1970s, poppers became strongly associated with the gay community and with gay venues such as gay bars, discos and bathhouses.

In the late 1970s, both Time magazine and The Wall Street Journal ran articles where they noted that the practise of using poppers for sexual purposes had now spread from homosexual men to avant-garde heterosexuals. Poppers relax muscles various parts of the body, including the throat, anus and vagina. They also increase blood flow. Because of this, they are used in an effort to facilitate and enhance sexual experiences.

Poppers are also used for their (short-lived) high. Poppers were a part of the club scene in the 1970s and then migrated into the rave scene in the 1980s and 1990s.